As a master he was strict; as a teacher he was kind; as a mentor he was wise, and as a friend he was true. On January 1st, 1991 he went one step further in a personal letter by declaring me to be his cousin – that day we became family too.

When, as a student at Hull University, I first read the small booklet filled with knowledge called Contact Your Higher Self Through Yoga, I began practising the exercises in it up to three times a day. These breathing exercises with spiritual affirmations transformed my life and I felt an immediate and close connection with the author who had published them, Dr. George King.  But I never dreamt that years later I would become so close to him, someone I now regard as one of the greatest masters ever to walk the Earth.

Did I deserve it? Definitely not. The spiritual gulf between us would be better measured in centuries than years, and yet somehow through his patience and compassion we bridged it. He was a towering giant astride the world spreading light, hope and salvation. I was just there at the time – at least the last 20 years of it – talking to him virtually every day, either in person or on the phone throughout that period. My path had crossed his highway and to my immense good fortune the two had become merged. They still are, and I hope they always will be in this life and beyond.

You don’t need a guru to find truth, but it could make all the difference. You wouldn’t need to meet them, they may not be physically alive. If you discover a master, either in person or through their teaching, who is right for you, you are fortunate indeed. You should never become dependent upon them and a good teacher will make sure that you don’t. But you might start to realise something which took me several years to learn: it is one thing to follow a master, a better thing to love a master and an even better thing to help that master if you possibly can.

One way to help a master is to actively support the legacy they leave behind them and Dr. King’s legacy is King Yoga. He was, in my opinion, the greatest exponent of Karma Yoga (the path of spiritual service) the world has ever seen. He took it to a whole new global, even cosmic, level. I describe it as Karma Yoga in overdrive.

In the last year of his life he allowed me to co-author the book Realize Your Inner Potential with him. We had already written one book together at his suggestion, Contacts With The Gods From Space, which was proving popular with thousands of people around the world. This second book would be a practical one and, as such, was right up Dr. King’s street.

When I sent him the proposal for it, he approved it immediately, and this despite his overburdened workload at the time. I flew to California where he resided and we put together a complete synopsis for the entire book and the dozens of spiritual practices it would include. As a Master of Yoga, only he could authorise the inclusion of the most advanced of these and he did so with a generosity of spirit which was so typical of him.

There are many spiritual programmes available in many forms. Some are undoubtedly good, excellent even, but this is the only one which contains the unique hallmark of King Yoga. I know it works and not just because I practise it every day and have done for decades. I know it works because of Dr. George King, who through this book can become your master just as he is mine, and I couldn’t offer you anything more life-transforming than that.

Little did I envisage in Hull that one day I would co-author a book which contained the very exercises I was practising then. As it enters its third edition, Realize Your Inner Potential has become a spiritual manual for King Yoga. He would have been too humble to invent such a term but I am sure that he would have loved it. In fact, I would venture to suggest that, wherever he may be now, he does love it and that’s a good enough reason to spread it to the far corners of the Earth.

Dr. King was not a traditional yogi. He eschewed the life of a monk for that of a practical, hardworking, results-orientated achiever of spiritual goals – not for himself but always for others. He knew that it was necessary to get involved in building, publishing, designing, travelling, writing, speaking and so much more. He could not afford to detach from suffering in peaceful retreat; he had to be in the world but I am absolutely sure that he was not of it.

It might be disputed that you can declare someone to be your cousin. But whether or not it is questioned that I am a kinsman, no-one could doubt that I am most certainly a King’s man!

Richard Lawrence is an international bestselling author and Executive Secretary of The Aetherius Society. The 3rd edition of Realize Your Inner Potential is now available for £9.99 or £12.99 with DVD insert. www.richardlawrence.co.uk 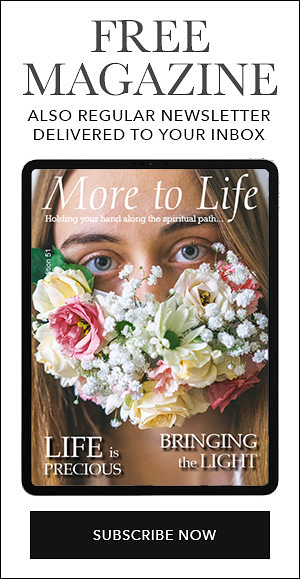 0
Since the recent and very unexpected passing of a close friend, I have found myself becoming more and more reflective. I guess losing someone...
Read more
Uncategorised

0
Stargazing for October 2020 As we continue to turn towards the depths of our souls in order to yield to a deeper sense of connection,...
Read more
Edition 49

0
Listening is an art. It’s not simply about sound waves being picked up by your two ears; it’s far more than that. Learning to...
Read more
Edition 49

0
O my own, you have come to me!” My guru uttered the words again and again in Bengali, his voice tremulous with joy. “How...
Read more
Edition 41

0
Many of us like to think of ourselves as “spiritual” – and would run a mile from being labelled as “materialistic”. But what’s the...
Read more
Edition 45

0
I am a point of light within a greater light. I am a strand of loving energy within the stream of love divine. I am a...
Read more
Richard Lawrence

0
Dr. George King revolutionised the approach to prayer. Even as a child he was frustrated by the lack of conviction and energy he saw...
Read more