Travelling through the beautiful landscapes of China can be one of the most inspiring and life-changing experiences we can encounter. And yet, there is so much about China which is completely alien to the western mind and imagination.

A helpful way to unlock many of the mysteries of Chinese spiritual wisdom is to focus on its sacred mountains. It is those mountains which figure prominently in so much of Chinese art, literature, history, thinking and mystical insight.

For the Chinese, mountains are far more than simply inspiring places of beauty and epic scale. Instead, mountains represent a foundation to the principle of fertility that renews and sustains the cosmos.

The literature which captures that profound reflection can be traced as far back as the fifth century BC to an ancient Chinese book called the Shu-ching. Within those profoundly influential words, we learn about the legendary ruler of China who is believed to have reigned in the third millennium BC. His name was Shun. Every five years, Emperor Shun would travel to the four sacred peaks of China. At each mountain, Shun would meditate on the looming grandeur of those massive peaks. He would make humble sacrifice to heaven. Even the titles given to Shun’s courtiers and advisors demonstrated his appreciation of the mountains. Shun’s most highly ranked official was therefore given the title of (Chief of the) Four Mountains. Within the art, literature and philosophy which Shun is said to have inspired, mountains are employed as sacred links between Earth and Heaven.

For Confucius (551BC – 479BC), Shun was one of his most abiding inspirations. Indeed, Confucius always spoke of Shun as the ideal Chinese ruler – living without corruption, self-interest or material intent, but always with virtue as his constant goal. Equally, Confucius taught that Chinese mountains can always be regarded as sources of personal stability.

The Analects are the most important collection of Confucian teaching. They frequently make reference to Chinese sacred mountains as sources of life-changing wisdom. The waters which flow down mountain slopes as rivers, streams, waterfalls and brooks are regarded by Confucius as being some of the most enduring of all symbols of renewal, fertility and hope. 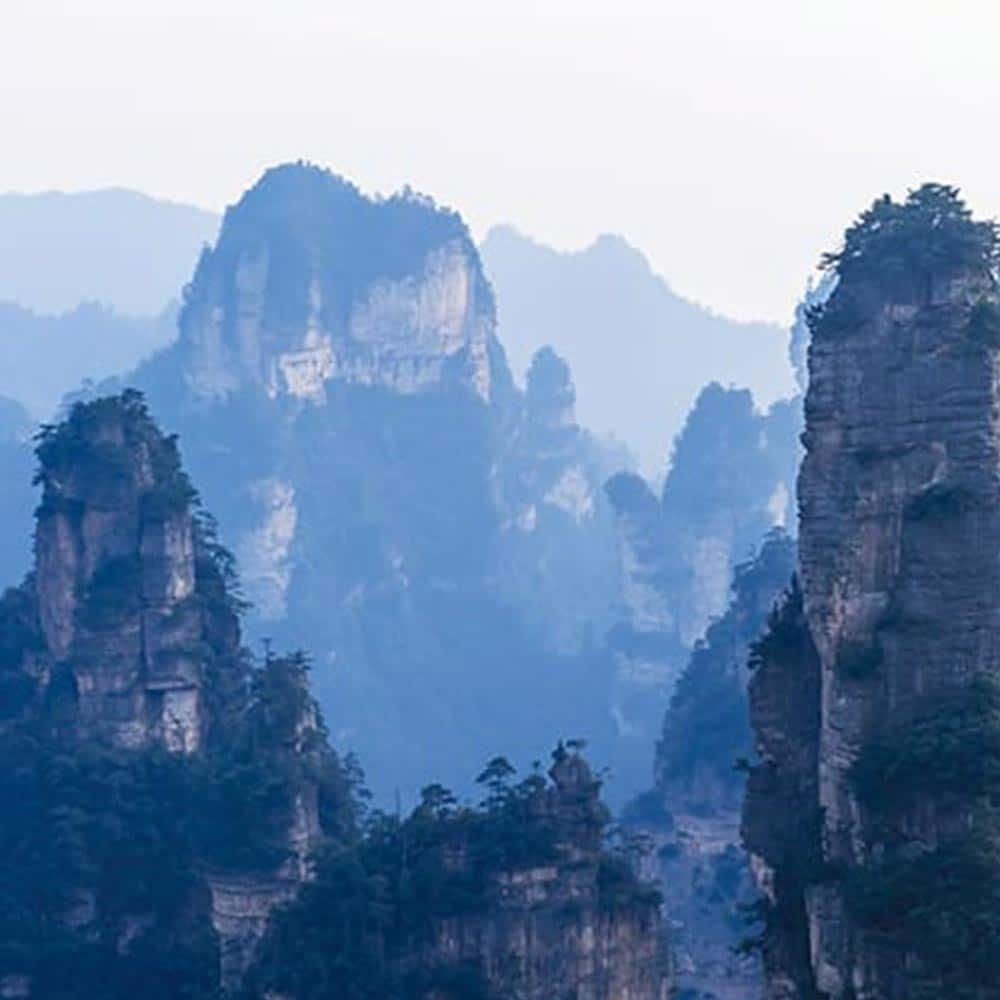 Even beyond pure wisdom, Confucius placed the virtue of benevolence as being the pinnacle of being human. That too was found to be inspired by the sacredness of mountains. Confucius justified this belief by stating that just as mountains are peerless in their natural and supernatural magnificence, so too is benevolence. The following words from The Analects (6.21) make this clear:

The wise take pleasure in water, but the benevolent in mountains; because wisdom moves about, but benevolence remains still. Wisdom leads to happiness; benevolence to a long life.

Taoism is also wise in appreciating the sacredness of Chinese mountains. The founder of Taoism is believed to have been Lao Tsu. He is thought to have been a contemporary of Confucius, although the dates of his birth and death have been lost. Until the 4th century AD, Taoists taught that mountains were inhabited by divine immortals who live in harmony with the Tao – the spiritual; essence of all reality. Taoist disciples and teachers often withdrew from society and sought solitary contemplation in isolated mountain landscapes where they would encounter revelations and insights to inspire their quests. Unitl the 4th century AD however, mountains were also regarded as being fascinating but dangerous places – landscapes of fear as well as irresistible fascination.

Those teachings that Chinese mountains were as fearsome as they were fascinating changed the in the 4th century AD when the ancient Chinese capital of Loyang was sacked by invaders. The city’s inhabitants fled for their lives. Among them, were some of the most influential of all Chinese writers, thinkers and mystics. As they fled to parts of China which they had never seen before, those people soon changed the way they regarded mountains. Instead of them being landscapes of fear, mountains became regarded as places of pure revelation and endless delight.

Writing in the 5th century AD, the poet Hsieh Ling-yun captured this changed way of appreciating mountains in the following words:

In the mountains all is pure, all is calm;

All complication is cut off.

Rare are they who know to listen;

Happy they who possess wisdom.

If the cold wind stings and bothers you,

Sit in the sun: it is always warm there.

While, opposite, in the shade, all is frost and snow .

One pauses on ledges, one climbs to the foot of high clouds;

One sits in the depths of a gorge, one passes windy grottos.

Here is a realm of harmony and joy,

Where the past and the present become eternal.

Although Hsieh Ling-yun was a Buddhist, he was wise enough to draw deeply from the teaching of the Taoists and Confucius. From that rich conjunction of belief came the Ch’an tradition, which later became expressed in Japan as Zen. Within the Ch’an belief, the poet and mountain recluse Han-shan wrote the following lines of wisdom. They are as true today as they were when Han-shan wrote them sometime between the 6th – 9th century AD:

Men these days search for a way through the clouds…

The mountains are high and often steep and rocky…

Do you know where the cloud way lies?

There it is, in the midst of the Void.

The Woman Who Changed History

0
Seventy-five years ago, something happened that changed the lives of all spiritually-minded people. We should be deeply grateful, yet hardly anyone now knows about...
Read more
Brahma Kumaris

The Power to Pack Up and Let Go

0
There is a part of you that is perfect and pure. It is untouched by the less than perfect characteristics you’ve acquired by living...
Read more

A Journey into Ayurveda

0
My introduction to the ancient Indian system of medicine called Ayurveda was in 1979. It was at Mentmore Towers in Buckinghamshire, which at that time...
Read more
Edition 39

0
For years Sue Doughty has understood the principles of Feng Shui and helped her partner Thomas Coxan achieve great things for his clients –...
Read more
Edition 39

0
Honeybees have been having a difficult time recently. The last few decades in particular have seen declines in numbers of honeybees, mainly in the...
Read more
Edition 44

0
Dendrotherapy is nothing new. Beneficial properties of trees for have been appreciated for centuries. It is a branch of folk medicine – a method...
Read more
- Advertisement -